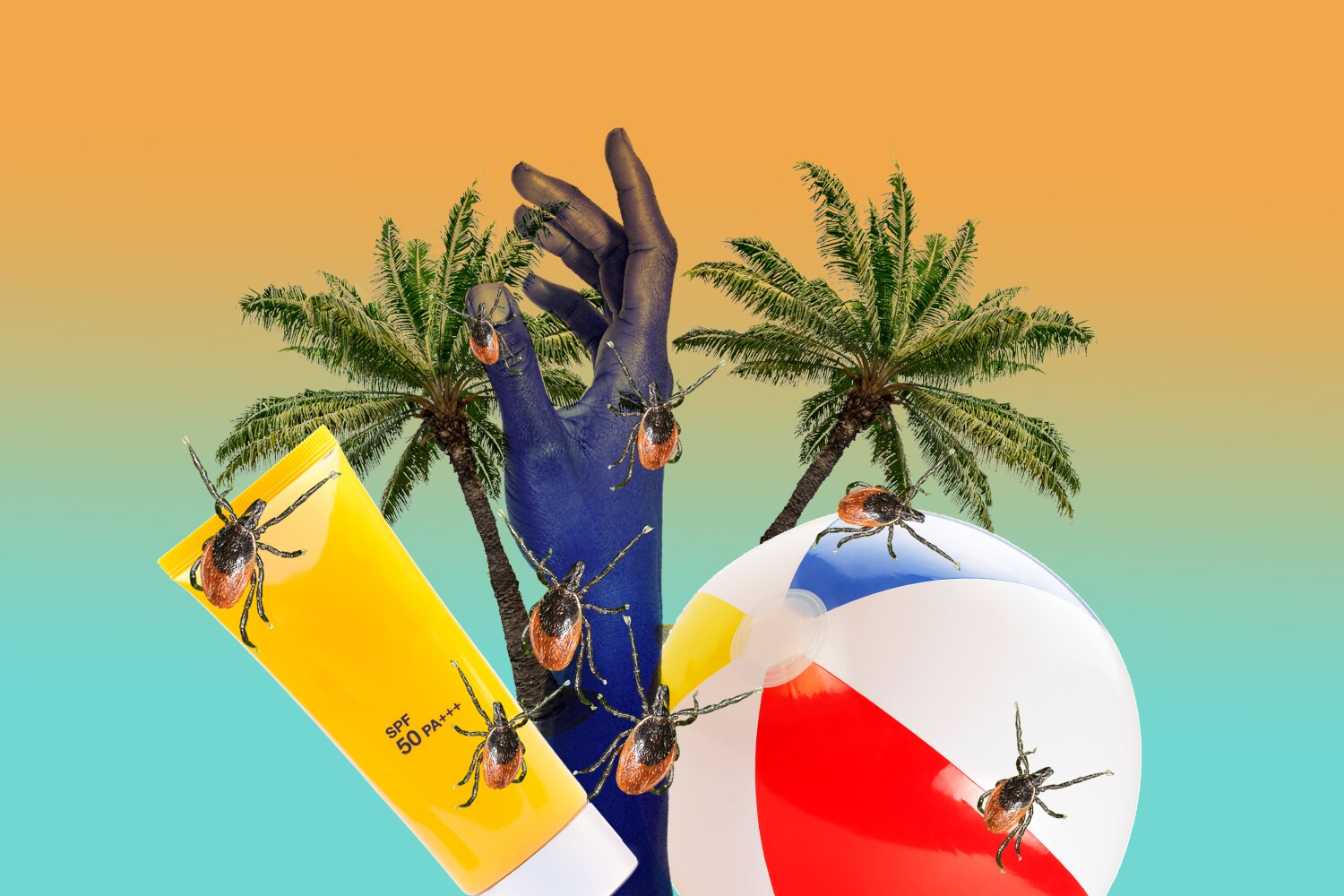 For years, hikers have worried about ticks and the Lyme disease they can transmit. Now a new study, based on field work in the San Francisco Bay Area, has some scientists thinking that there may be more disease-carrying ticks near beaches than we thought. This, just as summer begins.

But should we worry in Southern California, and what can we do to stay safe?

The first thing to remember is that disease-bearing ticks are not creeping beneath your beach blanket.

“Ticks aren’t going to be in the sand, obviously,” said Dr. Raphael Stricker, medical director of Union Square Medical Associates in San Francisco. He also serves as medical director of lymedisease.org and is on the California Department of Public Health’s Lyme Disease Advisory Committee.

There are plenty of protective moves to think about if you’re hiking to the sand, Stricker said, but “once you’re on the beach, you’re probably OK.”

Daniel J. Salkeld, of Colorado State University, wrote April 23 in the journal Applied and Environmental Microbiology of finding “a surprising diversity of tick-borne pathogens” in coastal chaparral areas of Marin and Sonoma counties.

But that doesn’t mean anything has changed in Southern California.

“We haven’t heard anything about the tick population increasing on our beaches. From what we’ve read about the study about ticks in Northern California, it sounds like the ticks were found in the brush and vegetation that beachgoers walk through to get to the sand, but not on the sand itself,” said Nicole Mooradian, spokeswoman for L.A. County’s Department of Beaches and Harbors.

“Our beaches are mostly sand, with little vegetation for visitors to walk through.”

Ticks live by sucking blood from humans and other animals, including lizards, rodents, deer, dogs and horses. They often wait on leaves or grass blades, then transfer to humans and animals as they pass by.

But those who hike to the beach, passing through woodlands, grass or coastal chaparral, could encounter ticks, including the Western black-legged tick, which can spread Lyme disease.

What preventive measures can you take? County and state public health websites include these and other tips:

Lyme disease was first diagnosed in the 1970s in Lyme, Conn., according to the website of the University of California’s Integrated Pest Management Program. From 2005 through 2014, California authorities reported 57 to 97 cases per year statewide.

In Los Angeles County, about 20 to 30 suspected cases are reported a year, according to the county’s Department of Public Health. Its website notes that fewer than 10 cases per year have been confirmed, most of those involving people who contracted Lyme disease outside the county.

But many Lyme disease sources note that the affliction, often difficult to diagnose, may be under-reported or misclassified. Symptoms over time can include rashes, headaches, arthritis, facial palsy and nerve pain.

“The risk of Lyme disease is really hard to define these days, because we’ve found it in every state and all sorts of environments,” Stricker said.

The L.A. County West Vector and Vector-Borne Disease Control District said the Western black-legged tick is one of most abundant among the nine varieties found in California, and the one most closely linked to Lyme disease. The ticks can be as small as a poppy seed.

The idea of ticks living near the beach “isn’t really anything new,” Stricker said. “Ticks like that kind of brush that’s close to the ocean just because there’s a lot of humidity.”

In this region, the youngest ticks (nymphs) often come out in January and February, rather than May or June in the rest of the country, he said. Similarly, this region’s peak tick season often ends before mid-summer because “when it gets really hot [and dry], then it’s harder for them to get around.”

The pandemic had canceled our 25th wedding anniversary, pending further notice from the national Centers for Disease Control and Prevention. Well, 2020 is still technically our 25th year together, despite COVID-19. But rather than trying […]

Caltrans says Highway 1 near Big Sur will reopen by summer

Caltrans is estimating it can reopen Highway 1 — and reconnect Southern California with Big Sur and points beyond — by early summer. The highway closed Jan. 28 after a 150-foot section at Rat Creek […]

The Rudest Things You Can Do At The Airport

Airports are not generally known as fun and carefree places. But that doesn’t mean you have to add to the unpleasantness. “Traveling is stressful,” Jodi R.R. Smith, president of Mannersmith Etiquette Consulting, told HuffPost. “But […]