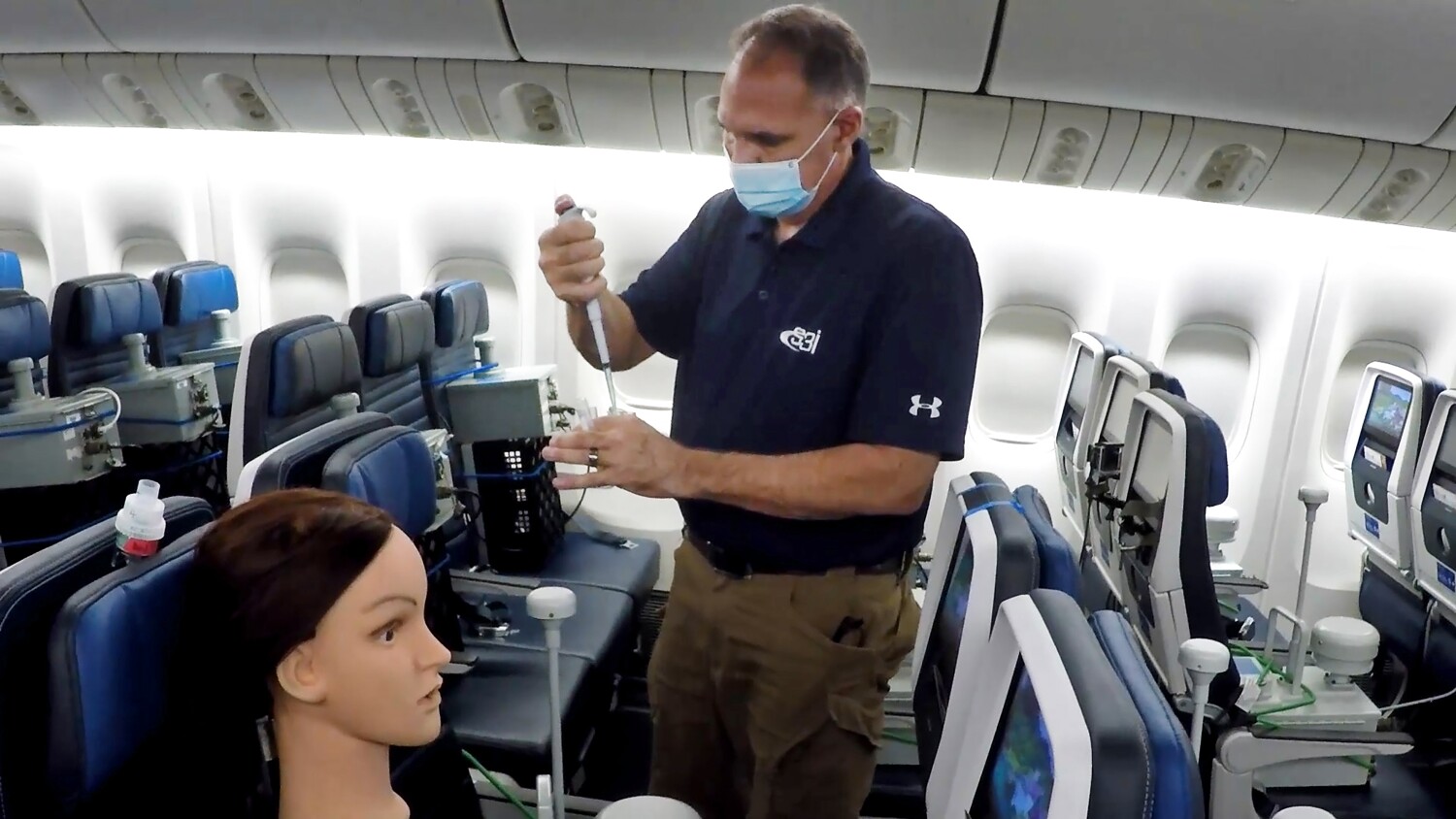 With the demand for air travel still in a slump, the airline industry is promoting studies that suggest the risk of contracting the coronavirus while flying is low.

Although healthcare experts say the air filtration system in most commercial planes helps reduce the risk of being infected, they point out that the studies have limitations and the results are not all definitive.

Delta Air Lines and two of the world’s largest airline-industry trade groups have promoted the recent studies as they seek to ease the fear of flying during a pandemic that has killed more than a million people worldwide.

New study from @HarvardChanSPH reveals that the multiple layers of protection against COVID-19 make being on an airplane as safe if not substantially safer than other routine activities, such as grocery shopping or going to a restaurant. https://t.co/HG8l0ep2UD

The volume of passengers flying on U.S.-based airlines is down 63% compared with the same time last year, with domestic travel dropping 61% and international flying down 77%. As a result, U.S.-based carriers are losing more than $200 million a day combined, according to Airlines for America, a trade group for the U.S. airline industry.

The most prominent study was conducted and sponsored by United Airlines, airplane manufacturer Boeing and the U.S. Department of Defense. To see how the coronavirus might spread in a commercial jet, the study measured a fluorescent aerosol spray that was emitted from a mannequin placed in various seats in two types of Boeing jets.

The mannequin was moved throughout the cabins of the planes, with sensors installed in surrounding seats to measure how far the aerosol spray traveled. More than 300 tests were conducted, with variables such as having the mannequin emit aerosol at different strengths to replicate breathing, speaking or coughing. Tests were performed with and without the mannequin wearing a mask.

The study concluded that the “aerosol exposure risk is minimal even during long duration flights,” with the highest risk coming to those sitting in the same row as the mannequin.

Infectious-disease and healthcare experts say the study correctly concludes that the infection risk is lower on a plane than in places such as stores and restaurants. The study gave much of the credit to the air circulation system in airplane cabins that pushes air through high-efficiency particulate air filters, known as HEPA filters.

But the experts note that the test was limited to certain scenarios. The study did not measure what happens when an infected passenger turns his or her head to talk to a fellow traveler or gets out of the seat to walk down the aisle or use the lavatory. The mannequin stayed in a seat, facing forward, during the tests.

“In real life, people move around the plane, disrupting the airflow and probably resulting in higher exposures in some locations and lower exposures in others, compared to the study,” said Linsey Marr, a professor of civil and environmental engineering at Virginia Tech. “These real-life considerations could easily increase the risk by a factor of 10 to 100.”

The test also assumed that all passengers wore masks and that the cabin had only one infected person.

More than 900 passengers have been banned for refusing to wear a mask on Delta, United and Alaska Airlines, according to a recent tally by the Washington Post.

Mercedes Carnethon, a professor of preventive medicine at Northwestern University, added that the study did not gauge the risk of getting to and from a flight, walking through a crowded airport terminal and queueing up with travelers who may or may not be wearing masks.

“Based on these findings, the time spent on the airplane is not the riskiest aspect of traveling,” she said.

The study includes a section titled “Limitations and Assumptions” that acknowledges some of those points.

What other data have been touted by the airline industry?

The International Air Transport Assn., the trade group for the world’s airlines, announced this month that there have been only 44 cases this year in which COVID-19 is believed to have been transmitted on a plane. By comparison, the group noted, about 1.2 billion travelers have flown on commercial flights worldwide in the same period.

“We think these figures are extremely reassuring,” Dr. David Powell, the IATA’s medical advisor, said in a statement. “Furthermore, the vast majority of published cases occurred before the wearing of face coverings in flight became widespread.”

The group said its numbers align with data in a study recently published in the Journal of Travel Medicine.

Is everyone on board with that?

No. Dr. David O. Freedman, a professor emeritus of infectious disease at the University of Alabama at Birmingham who co-wrote the Journal of Travel Medicine study, said the IATA misrepresented his findings.

Although he agrees that the overall risk of getting infected while in a plane is low, he said the IATA cannot assume that only 44 travelers have been infected on flights when there are no data showing that the other 1.2 billion fliers were tested or quarantined after they disembarked from their flights.

“You can’t say the denominator is 1.2 billion uninfected because only a small handful of these passengers were ever tested for COVID,” Freedman said. “IATA wanted a number, but no good published risk numbers are yet out there.”

In the Oct. 8 press release that touted its findings, the IATA acknowledged that “there is no way to establish an exact tally of possible flight-associated cases.” It said it reached out to airlines and public health authorities and reviewed available literature and found no “indication that onboard transmission is in any way common or widespread.”

Are there other industry-backed studies?

The Harvard T.H. Chan School of Public Health released a study Tuesday that was sponsored by Airlines for America and a consortium of other airline businesses that concluded “there has been little evidence to date of onboard disease transmission.”

The study was based on the review of previously published studies and public data, plus modeling of onboard disease transmission data conducted by Harvard experts. The study said airlines have kept onboard transmissions low by requiring masks on all passengers and crew members, pushing cabin air through HEPA filters, disinfecting cabins between flights and screening passengers for COVID-19 symptoms.

Did the study call for any changes in the way we fly?

The Harvard study concluded that to further reduce the risk of onboard infections, airlines should continue to operate the air ventilation system while passengers are boarding and leaving the plane. It also said passengers should be encouraged to maintain physical distance from one another when they file into the plane’s cramped aisles to find their seats and when filing out to exit the plane.

HuffPost may receive a share from purchases made via links on this page. Prices and availability subject to change. kiboka via Getty ImagesThe best weekender bag is the one that works for you and your […]

On one of the smallest islands in California’s least-visited national park, my daughter, Grace, and I went in search of splendid isolation. We found carnage, heard shrieks and wandered the topography of an acrophobe’s worst […]

This story is part of a package on holiday travel. The holidays this year promise an extra helping of FOMO because of FOCC — Fear of Missing Out because of Fear of Catching Coronavirus. We […]