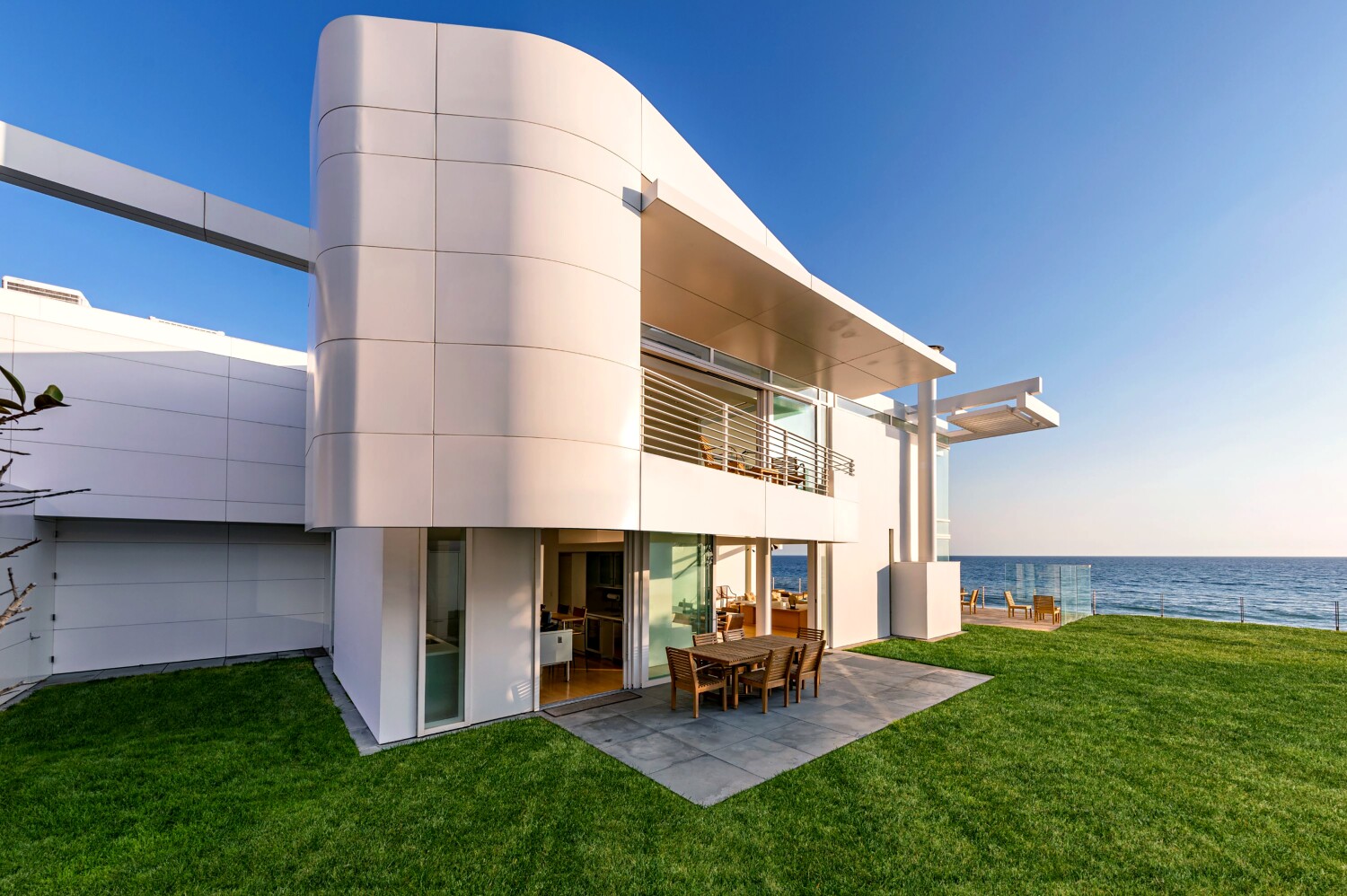 The price keeps dropping for Eli Broad’s architectural marvel overlooking the Pacific Ocean. The billionaire philanthropist just relisted his Malibu home for $58.5 million, down around 22% from his original ask of $75 million.

One of the most stylish properties currently up for grabs in Southern California, the contemporary gem was designed by Richard Meier, the Pritzker Prize-winning architect behind the Barcelona Museum of Contemporary Art and San Jose City Hall. Wrapped in sleek aluminum panels and frosted glass, the curvaceous beach house resembles another of Meier’s works — the Getty Center in Brentwood.

The estate combines two lots for a total of 105 feet of beachfront. It takes full advantage of the coastal setting with glass-lined living spaces, a second-story balcony and wood deck that spans the backside of the home, descending via staircase to the beach below.

Between the main house and guesthouse, there are five bedrooms and seven bathrooms in 5,374 square feet. Museum-like living spaces, such as a two-story great room with a fireplace, take in views of the water.

There’s a sauna in the primary suite, and other highlights include a two-story entry and open-concept dining area. Outside, grassy lawns and patios fill the space between the two homes.

A native of Michigan, Broad co-founded Kaufman & Broad Home Corp. and founded the Los Angeles-based retirement savings firm SunAmerica, which he sold in 1999 in a multibillion-dollar stock deal.

A major influence on L.A.’s art scene, the 87-year-old helped create and establish the Museum of Contemporary Art in 1979 and is a life trustee of the L.A. County Museum of Art. He also founded the Broad museum in downtown Los Angeles to house the collection of contemporary art that he and his wife, Edythe, have amassed. Forbes puts his net worth at $6.9 billion.

Broad could trim the price over and over and still make a profit. Records show he amassed the two-parcel property for $5.65 million in the late 1990s, and the home was finished in 2002.

Starbucks Workers Confront The Big Question: Should I Go Back To Work In A Pandemic?

When her Starbucks store in downtown Baltimore reopened last week, Kealea Foy saw too many reasons not to show up for work. There was still a pandemic going on outside, with models projecting tens of […]

A North Carolina Salon Reopened, But Poultry Workers Aren’t Welcome Yet Due To COVID-19

The hair salon SmartCuts reopened its doors in Wilkesboro, North Carolina, on Memorial Day weekend after a long closure due to the coronavirus. But not every customer was welcome to hop in a chair like […]

Puerto Rico’s Troubled Utility Is A Goldmine For U.S. Contractors

This project was reported in collaboration with NBCLX. The asthma attack that killed Anibal Dones Torres came in the inky darkness of night. Hours after he and his family went to bed on Feb. 9, […]