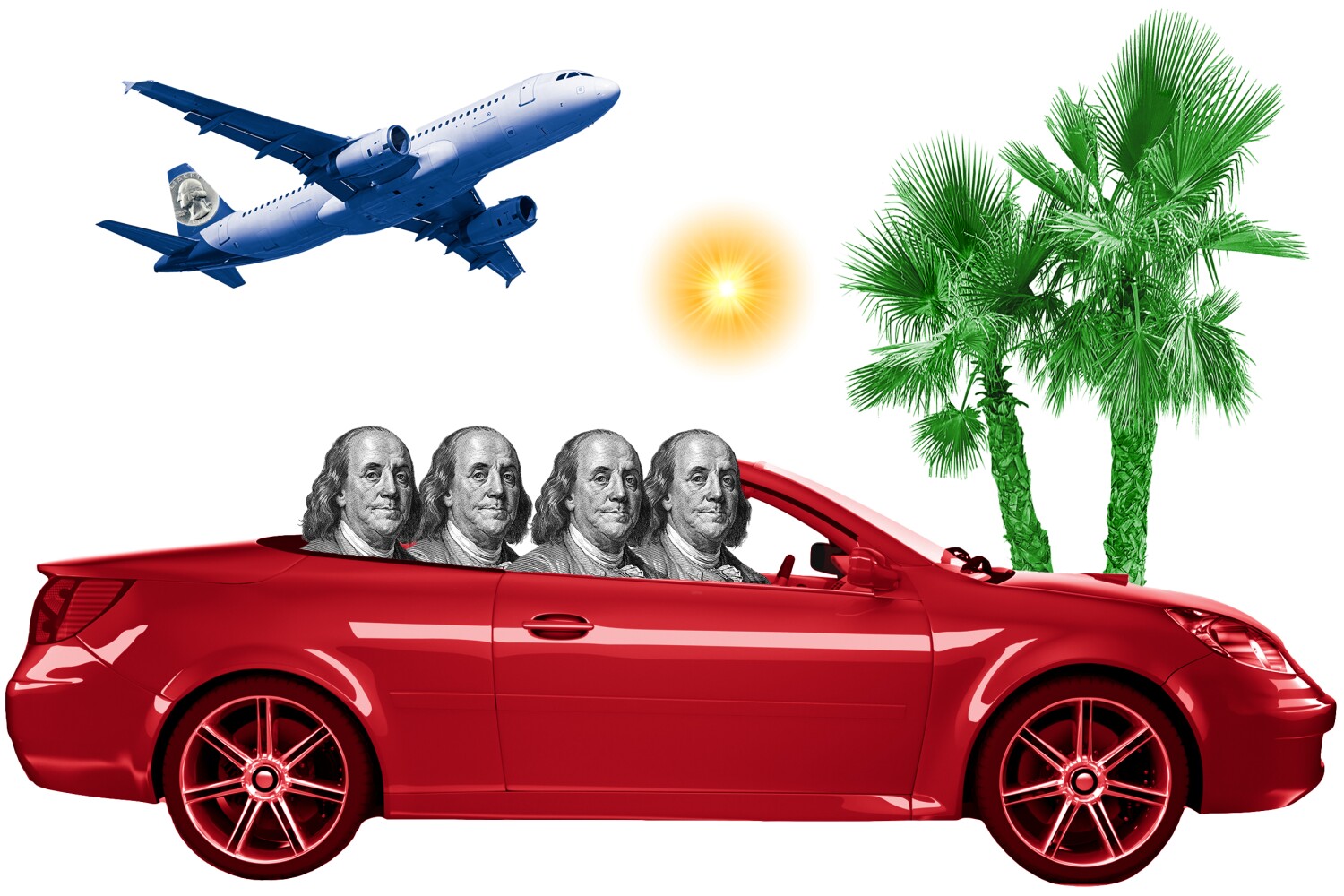 You can fly from Burbank to Bozeman, Mont., one of the gateways to Yellowstone National Park, for $38 round trip, thanks to fares offered for Aug. 11-18 on startup Avelo Airlines. Super deal. Then you decide to book a rental car. The best price for an on-airport rental that turned up on Kayak, a search aggregator, was — wait for it — $2,028 for a week. That’s through Hertz, which chooses the model for you and asks you to pay in advance.

Welcome to car wars, the rental version, another side effect of the pandemic. This one threatens to make your rental, usually an afterthought, more expensive than your plane ticket.

The pandemic hit the rental car industry in the chops. The industry suffered “much greater disruption than at 9/11 and the Great Recession,” said Chris Brown, executive editor of Auto Rental News. “Business went from pretty decent in the first quarter [of 2020] to the worst it’s ever been. Business dropped off 85%.”

Unrented cars sat gathering dust in parking lots, and many were sold. About 4,000 were destroyed in a fire in April 2020 that burned a lot near Southwest Florida International Airport, which serves the Gulf Coast. They were valued at $100 million, Auto Rental News reported.

Replenishing stock is now trickier because of a chip shortage, Brown said. Bloomberg reported that the semiconductor shortage could affect production of as many as 1.3 million vehicles.

As a result, “You’re seeing car rental rates through the roof,” Brown said.

The rates are especially high in remote destinations, including Hawaii, places near national parks and, surprisingly, some urban areas. Here’s a look at some car rental rates at various destinations, as researched on Kayak, and how they compare with lowest airfares from LAX on Google Flights. (Dates were chosen at random.) Like the Avelo/Hertz comparison above, these rates may no longer be available.

Dates: July 14-21
Airfare: $458 round trip on Hawaiian, Delta and Alaska
Car rental: On Priceline, $737 for the week for a Volkswagen Passat (or similar) from Payless. Rate is for a paid-in-advance reservation. At Dollar, it’s $815 for a Chevrolet Spark, which must be paid in advance; cancellation is free.

Airfare: The best fare to Denver, about 58 miles from Estes Park, home to Rocky Mountain National Park, was $156 on Spirit and back on Frontier, both low-cost carriers. A flight on legacy carrier American was $223.

Car rental: $705 for a week for a Ford Focus at Budget. Several cars were offered through the “surprise agency” and also labeled “supplier choice,” which means you won’t know what vehicle you’re getting or through what agency. That rate showed at $519 on Hotwire, but when I clicked through, a message said the price had changed and that I should “nab it before it goes up again.” The tab was now $622 through Ace Rent a Car in conjunction with Hotwire. When I clicked through again, the listing noted that there was no free cancellation.

Dates: Aug. 6-13
Airfare: $177 round trip on Delta and Alaska
Car rental: $380 for a week for a Hyundai Elantra at Enterprise through Priceline, which notes that you are not charged until pickup and that free cancellation is offered. For a better but slightly weirder deal, you could rent a commercial vehicle — basically, a van — that will fit two people and nine bags through Hertz for $264.

Ways to save on a rental

Book as far ahead as possible. That’s the advice from Enterprise Holdings, which includes Enterprise, Alamo and National brands. Just find out whether there’s a cancellation fee. Further, Enterprise said in an email, “Providing flexible travel dates in [a customer’s] search may also help increase their options. We have been working closely with our manufacturing partners since last summer to continue to add vehicles to our fleet to meet the ongoing increase in demand.”

Consider car-sharing services. Turo, which claims it is the largest car-sharing company, has cars in vacation destinations in the West, across the U.S. and in Europe. Here’s how this works: You need a car. A car owner may need to park a car at the airport for a trip or to make extra income from a vehicle that sits empty. That car gets rented. The owner may get free parking at the airport plus some cash, and the renter gets a deal.

Not all cars are hot tickets: You could grab a Kia Rio for $48 a day or a 2017 Chevy Spark for $65 a day. That makes a Mitsubishi Mirage rented from Enterprise slightly less expensive at about $62 at an off-airport site.

You also can check prices on the app for Getaround, which operates in California, Oregon, Arizona, Colorado, Washington, Texas and other locations across the country. Or try Zipcar, which rents by the hour ($10) or day ($83) through a membership that starts at $7 a month and includes free gas and 180 miles a day (58 cents a mile after that).

Use public transportation. It may not be glamorous, and social distancing isn’t guaranteed, but you won’t pay to park a vehicle you use only to get back and forth to your destination.

Compare on- and off-airport rates. In Seattle, which is notorious for the high cost of airport rentals, you can rent a Chevy Spark at the airport for $555 for June 11-18, about $80 a day, through Carrental8.com. In town, you can rent a Spark at Thrifty for $414 for the week, or about $59 a day. Hertz, which filed for Chapter 11 in May 2020, is encouraging renters to check out this option because of its many neighborhood locations, a spokesman said in an email.

Try an auto dealership. That $2,000 rate in Bozeman might make your Yellowstone trip a nonstarter, but before you ditch your plan, check out Toyota of Bozeman, where you can get a Toyota Rav 4 for $222 a week. That’s for April 30-May 7, not quite prime time in Yellowstone. And your airfare will increase to $43. Why not wait until those August dates? No availability.

Perhaps we’ve reached an age when our rental car now determines the dates of our trip.

Despite a stay-at-home order across much of California and a plea from health officials to refrain from traveling amid the worst surge of the coronavirus to date, many people are still flying in and out […]