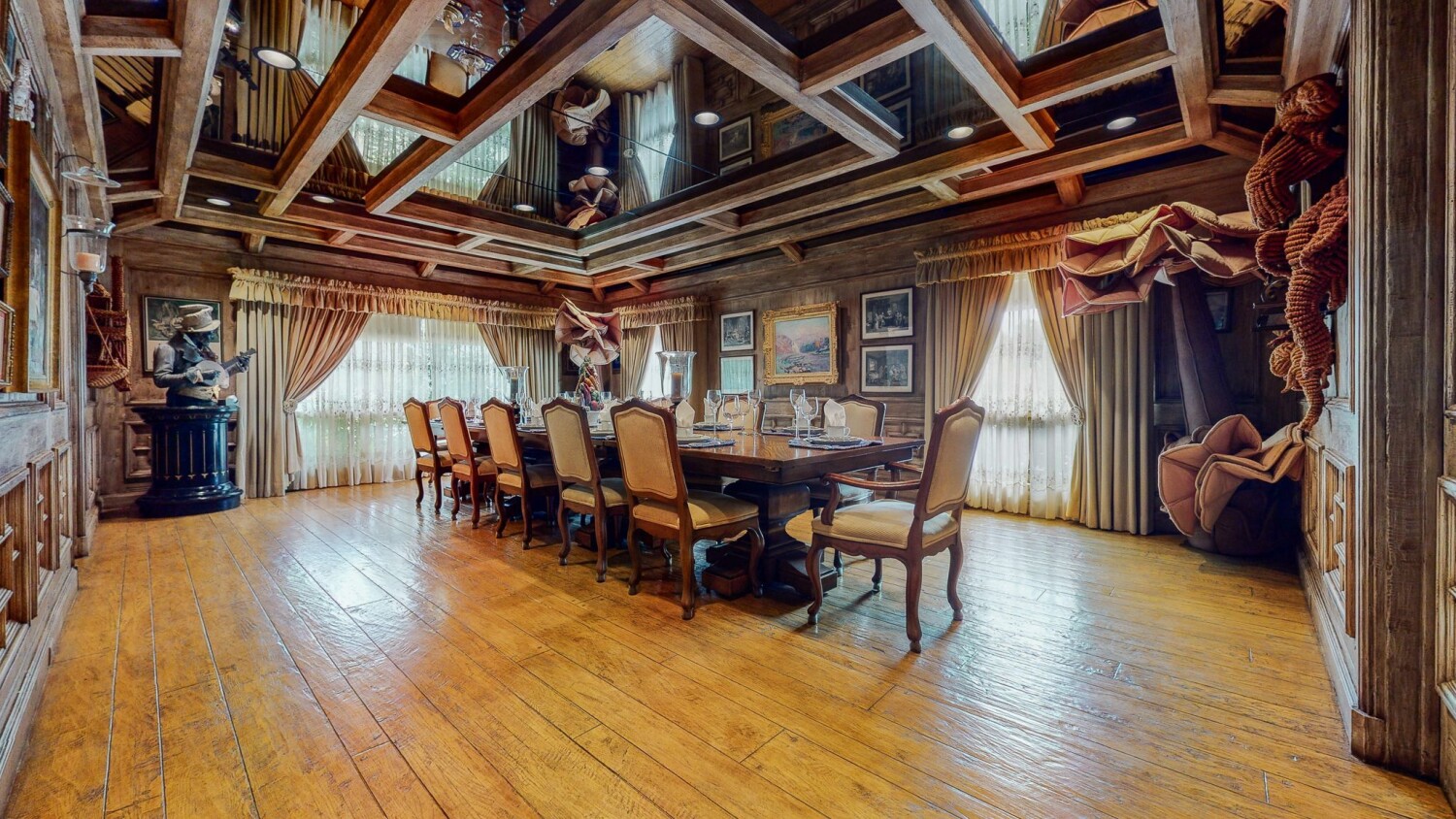 The longtime home of late actor Buddy Hackett, the iconic funnyman from “The Music Man” and “It’s a Mad, Mad, Mad, Mad World,” has surfaced for sale at $18 million in Beverly Hills.

Hackett, who died in 2003, had owned the estate since it was built in 1952. It’s currently being sold by his widow, Sherry Cohen.

The property spans an acre on a corner lot across from the Los Angeles Country Club. The interiors could use a remodel, so buyers have the option to either update the home, preserving its storied past, or erect a mansion of up to 20,000 square feet and add a second story to take advantage of the golf course views.

As of now, the single-story home covers about 7,800 square feet. Shaped like a U, it’s approached by two different driveways, and at the center sits a custom elephant statue gifted to Hackett by late hairstylist-to-the-stars Gene Shacove.

One of the main draws is the dramatic dining room, which features wood-paneled walls and mirrored ceilings.

“The dining room seats over 32 people, and Buddy used to host weekly luncheons for comedians,” said listing agent Sherry Sexton, adding that the guest list often included stars such as Don Rickles, George Burns and Jack Carter. “Phyllis Diller once said, ‘If you’ve been invited to one of Buddy Hackett’s lunches, you know you’ve arrived as a comedian.’”

Other highlights include a living room with a brick fireplace and a massive lounge with a wet bar and billiards room. Outside, there’s a swimming pool with a diving board and a sunken tennis court with stadium seating.

After serving in World War II, Hackett began acting in the 1950s with roles in “Walking My Baby Back Home,” “Everything’s Ducky” and “The Love Bug.” A frequent guest on “The Tonight Show Starring Johnny Carson,” he also appeared in the lead role of the sitcom “Stanley.”

Sexton of Selprop Inc. holds the listing with John A. Lucy of Keller Williams Hollywood Hills.

The Election Could Ultimately Decide The Dakota Access Pipeline’s Fate

It’s been a fitful few months for the Dakota Access Pipeline.  First, a federal judge ruled that the Army Corps of Engineers failed to carry out proper environmental reviews of the project before building the […]

This article is published in partnership with Newsy. As America creeps — or in some cases, sprints — back to business amid an ongoing pandemic, there’s at least one industry that’s largely charting its own […]

‘Time To Act’ Podcast: Inclusion In Technology By 2030