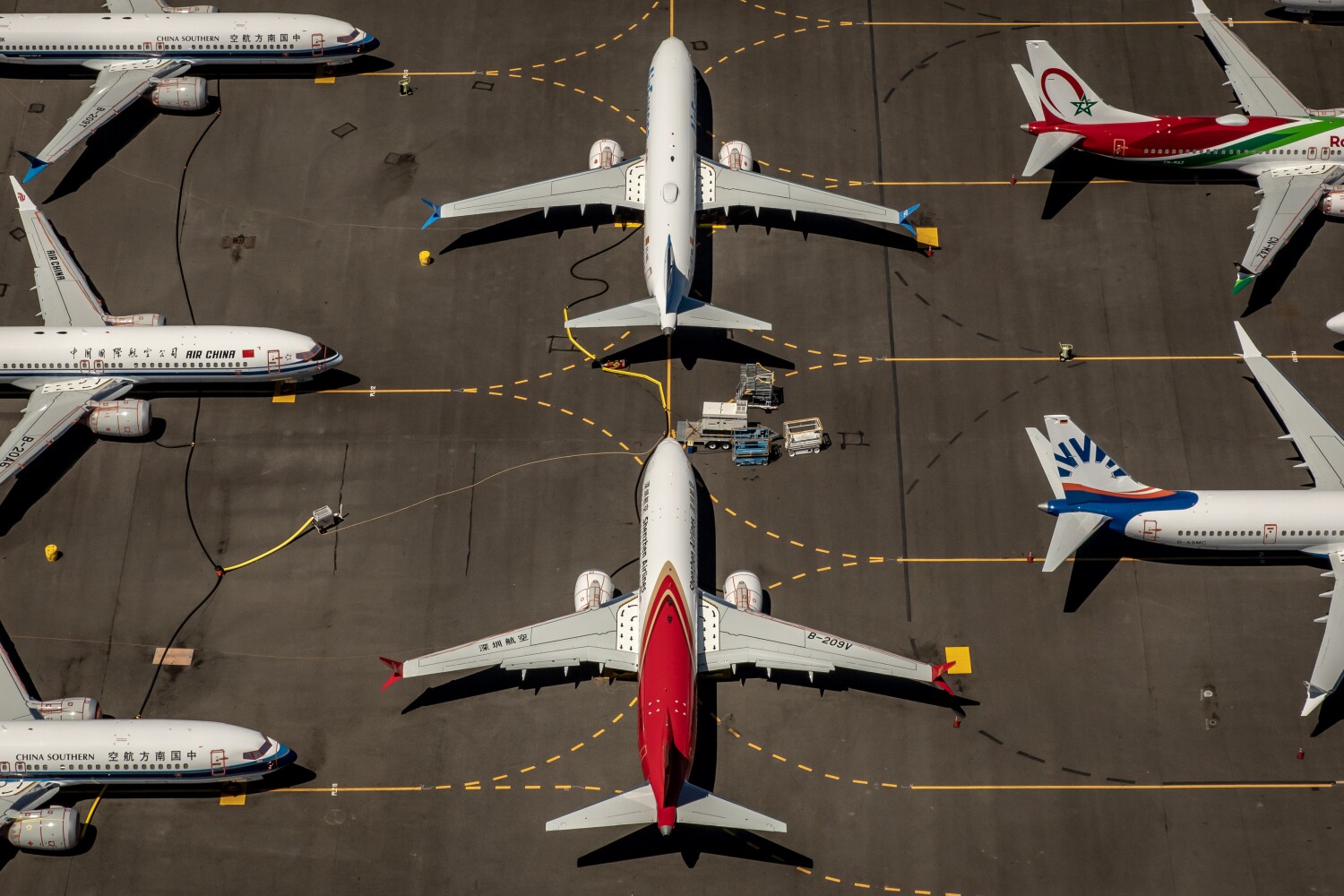 About two years after a pair of deadly crashes, the Boeing 737 Max plane is returning to the skies above Los Angeles as part of its gradual return to worldwide commercial service.

With a slew of investigations, tests, upgrades and regulatory approvals behind it, a 737 Max carrying passengers is set to take off Thursday from Los Angeles International Airport for the first time since March 2019, when the jetliner was grounded worldwide.

8:06 AM, Feb. 11, 2021An earlier version of this story said the first 737 Max flight at LAX was bound for Houston. It will arrive from Houston and head to Denver.

A Brazilian airline was the first carrier to offer the 737 Max flights in early December, and U.S. airlines started returning the plane to service at the end of last year. A United Airlines trip departing Houston at 2:37 p.m. will be the first 737 Max flight to land at LAX. It will then fly to Denver.

United hopes to give passengers the flexibility to avoid the 737 Max without avoiding the airline. It has promised that when travelers book a reservation, the airline will make clear what type of plane they’re slated to board. It also promised not to make any last-minute schedule changes that would unexpectedly put a passenger on a 737 Max.

If a passenger who is booked on a 737 Max refuses to fly, United said, the airline will rebook the traveler on a substitute flight at no charge or refund the ticket. All United routes will have non-737 Max options, the airline said: At least half the flights on each route will use other planes.

“We will be fully transparent with our customers and will communicate in advance when they are booked to fly on a Max aircraft,” the carrier said in a statement.

The first U.S. passenger flight of a 737 Max after the grounding was lifted was by American Airlines on Dec. 29, 2020, from Miami to New York. By Jan. 25, six airlines, including Air Canada, Aeromexico, WestJet, GOL and Copa Airlines, had flown the plane on more than 2,700 flights worldwide, with about 5,500 hours in the air, according to Boeing.

A couple of years ago, the 737 Max was Boeing Co.’s bestselling model, based on about 5,000 orders placed before the crashes. Boeing touted the plane as 14% more fuel efficient than its earlier 737s — and quieter, thanks to acoustic treatments in and around the engines. Airlines were eager to incorporate it into their fleets.

Then, in October 2018, one of the planes crashed. In March 2019, another one crashed. Everyone aboard the planes — flown by Indonesia’s Lion Air and by Ethiopian Airlines, respectively — was killed, a total of 346 people. Regulators worldwide grounded the Max. As investigations into the crashes went on, airlines began canceling orders.

The crashes were caused, investigators determined, by changes Boeing made that distinguish the 737 Max from its predecessors.

To handle a longer fuselage that could fit more passengers, Boeing put larger, stronger engines on the plane. Those engines had to be moved forward on the wings because they didn’t fit in the same places as the old, smaller engines. But the new placement could cause the plane to pitch up. To counteract that, Boeing added software called the Maneuvering Characteristics Augmentation System to automatically push the plane’s nose back down.

Regulators determined that a faulty sensor in the planes triggered the software system to nosedive under certain conditions, defying pilots’ efforts to regain control of the plane.

After 20 months of investigations, upgrades and tests, regulators cleared the plane to fly passengers again.

Would passengers book flights? Shortly after the crashes, many were hesitant.

A 2019 study led by aviation consultant Henry Harteveldt found that at least 20% of U.S. travelers said they would definitely avoid the plane in its first six months after flights resume. More than 40% said they’d be willing to take pricier or less convenient flights to stay off the 737 Max, he found.

Harteveldt hasn’t replicated that study but he said passengers are probably not as scared anymore because they recognize the work Boeing engineers and aviation regulators have invested in fixing the problem.

“It is a much better plane than before it was grounded,” he said.

So far, airline representatives and aviation analysts say passengers have not been refusing to board the plane en masse.

“Bookings on the Max are comparable to other aircraft, and we aren’t seeing data to suggest customers don’t want to fly the aircraft,” American Airlines spokesman Curtis Blessing said.

The Air Line Pilots Assn., which represents 59,000 pilots at 35 U.S. and Canadian airlines, has welcomed the return of the plane, saying it has confidence that the added training and software upgrades to the plane make it safe to return to commercial use.

“The engineering fixes to the flight-critical aircraft systems are sound,” the union said in November 2020, when the Federal Aviation Administration allowed the 737 Max to fly again.

The Assn. of Flight Attendants-CWA, which represents nearly 50,000 flight attendants at 17 airlines, has been more concerned about ensuring that federal regulators thoroughly scrutinize all new planes in the future to prevent such disasters.

“This is a moment when we must make good on our commitment to do far better and demand only the highest standards of safety,” the group said in response to the FAA decision to let the 737 Max carry passengers again.

Boeing said it continues to “work closely with global regulators and customers to safely return the airplane to service.”

FlyersRights.org, a passenger rights group with more than 60,000 members, is not confident about the plane. The group has filed two lawsuits, one to demand the FAA turn over detailed information about the tests done on the plane and the other asking that the FAA revoke the order that let the 737 Max return to service.

The FAA responded to the data request by providing the group with thousands of documents that were so heavily redacted that they were nearly impossible to comprehend, said Paul Hudson, president of the group. As for the lawsuit to keep the plane grounded, he said it was rejected by a Washington, D.C., court and is now under appeal.

Asked if he thought the public should fly on the 737 Max, Hudson said: “We think people should make their own decision.”

There’s no news today from four crucial corners of Arizona, Georgia, Nevada and Pennsylvania. Which is good. These are natural wonders, not voting precincts, and they seem safe from all the ballot-counting, victory-claiming, lawsuit-threatening tumult […]

JetBlue announced its intention on Tuesday to provide customers with pending flights the option to purchase an at-home COVID-19 saliva test. The tests are coordinated through a partnership with health care company Vault Health and […]