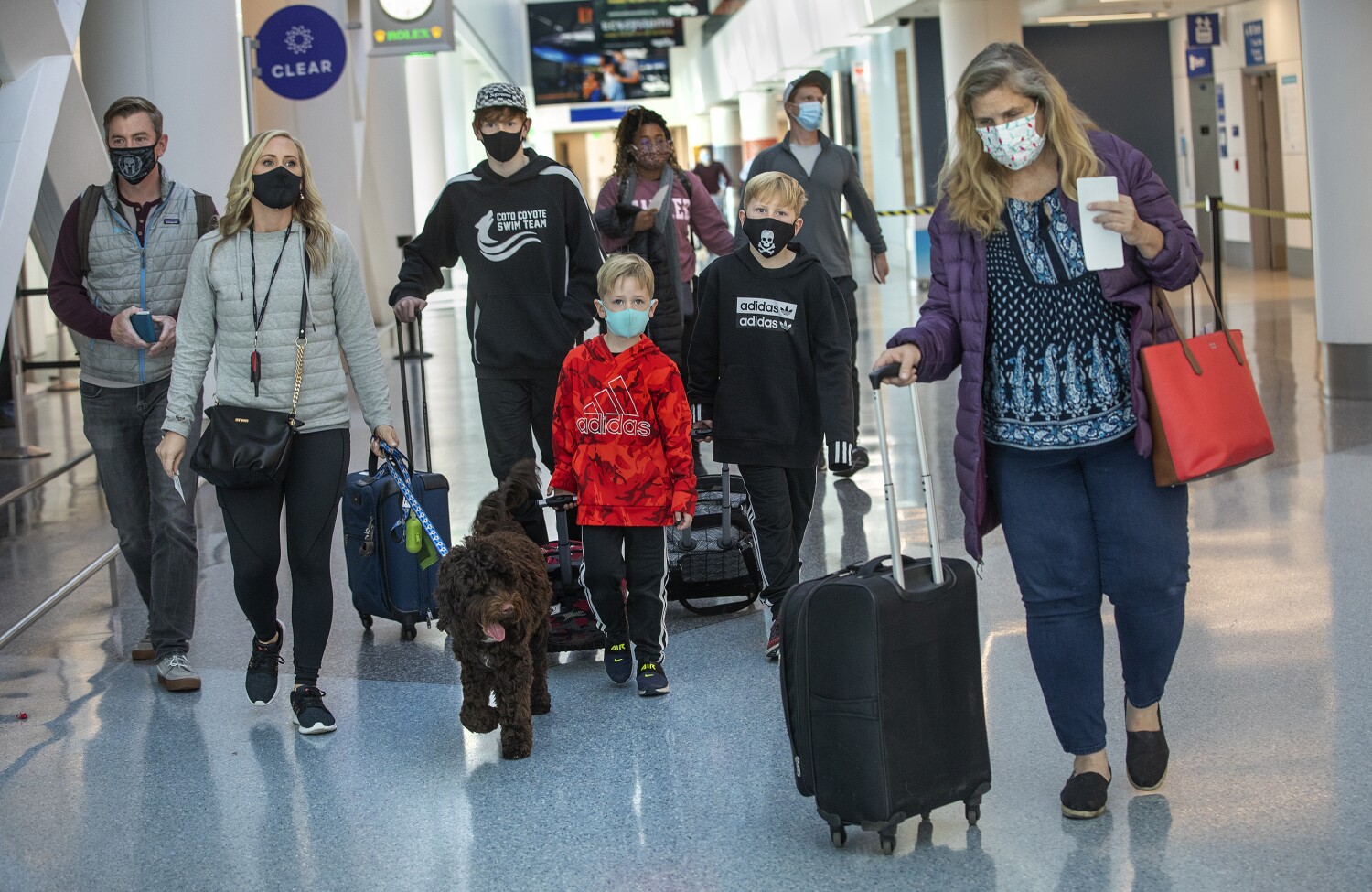 To lure hesitant fliers back onto planes during much of the COVID-19 pandemic, the nation’s struggling airlines waived change fees, freed up middle seats to promote social distancing, extended expiration dates on loyalty reward points and cut airfares.

Now that new U.S. coronavirus cases are dropping and travel restrictions are being lifted, the country’s airlines are starting to act like, well, airlines again.

Air carriers have reintroduced change fees for the least expensive tickets, returned to filling the middle seats and once again imposed expiration dates for many loyalty reward programs. On average, domestic airfares are up 12% from full-year 2020 prices, according to industry data, and are expected to climb by the end of the year to 28% above the full-year 2020 prices.

“During the pandemic, we saw airlines pulling out all the stops to incentivize people to travel,” said Adit Damodaran, an economist at Hopper, an airline and hotel data analysis company. “But I think the times are changing, and we are turning the corner here.”

The airline industry has suffered greater financial effects from the ongoing pandemic than from either the terrorist attacks of Sept. 11, 2001, or the Great Recession of 2007-09, according to industry experts. Air travel demand last year plunged to as little as 10% of the demand in 2019, leading airlines to park idle aircraft in remote desert airports and furlough thousands of flight attendants and mechanics.

Even the most optimistic industry forecasters say air travel demand in the U.S. won’t return to pre-pandemic levels until 2024.

To appeal to coronavirus-leery travelers, airlines have relaxed or removed some of the fees and restrictions that have made flying less than enjoyable for many passengers.

“The last thing a lot of companies want to do is alienate their most loyal and lucrative customers,” said Matt Schulz, chief credit analyst and loyalty reward program expert at Lending Tree. “It’s in their interest to play as nicely as they can.”

The policy changes adopted over the last year or so were an effort to “offer increased flexibility for customers,” said Carter Yang, a spokesperson for Airlines for America, a trade group for the nation’s airlines.

When coronavirus cases began to surge in early 2020, Delta, American, Alaska, Frontier, Hawaiian, JetBlue and Southwest airlines announced plans to promote physical distancing between passengers by blocking fliers from booking the middle seats in some or all sections of the cabin.

Every airline has since ended the middle-seat blocking strategy. Delta was the last major U.S. carrier to continue the program, ending it April 30.

With record-low travel demand in 2020 came rock-bottom airfares for passengers who were willing to board a plane despite the Centers for Disease Control and Prevention’s guidance to avoid nonessential travel. Domestic round-trip airfares in the U.S. dropped in 2020 to an average of $220, down 25% from 2019, according to Hopper.

The CDC updated its guidance this spring, saying that people who are fully vaccinated against COVID-19 — waiting at least two weeks after their final vaccine dose — can travel within the U.S. at low risk to themselves.

Experts suggest taking advantage of the low fares while they last.

“We are in this era of a lot of enticing fares,” said Sara Rathner, a travel expert at NerdWallet. “That will continue for some time. Then we’ll see all of those deals go away.”

Early in the pandemic, many of the nation’s largest airlines also waived their change fees — the charge for changing a reservation on a non-refundable ticket. It was a significant move because change fees have historically been a major source of airline revenue. Airlines in the U.S. collected $2.8 billion in change fees in 2019, according to the U.S. Bureau of Transportation Statistics.

Many U.S. airlines vowed in 2020 to permanently eliminate change fees on higher-priced tickets. But several, including American, Delta, Alaska and Hawaiian, have reimposed the fees on no-frills basic economy tickets.

JetBlue waived change fees for all fares booked through the end of May. But starting June 1, the airline’s low-priced Blue Basic fares for trips within the U.S., Caribbean, Mexico or Central America can be changed or canceled only by paying a $100 fee.

Loyalty reward programs also have been a big revenue generator for air carriers. The programs, along with commissions for booking hotel and car rental reservations through airline websites, generated $11.5 billion for U.S. carriers in 2019, according to an analysis by IdeaWorks, a consultant on boosting airline revenue.

When the pandemic made much travel inadvisable, several airline loyalty programs, including those for American, Frontier, Emirates and All Nippon Airways, delayed the expiration dates of their points by several months. Those extensions are about to end.

In the American Airlines program, AAdvantage, points that were scheduled to expire in 2020 remain in good standing until June 30 of this year. Points in Emirates Airlines’ loyalty program, Emirates Skywards, also will start expiring at the end of June.

Frontier Miles, the loyalty program for Frontier Airlines, postponed the expiration date indefinitely, with the caveat that it can reintroduce an expiration date with 90 days’ notice.

“You are going to see aggressive moves by the airline industry to raise fares and not become as generous as they are now,” said Jay Sorensen, president of IdeaWorks. “U.S. airlines are simply trying to recover a year of lost revenue.”

If the coronavirus has you going stir-crazy, there’s a good chance you’ve thought about renting or buying an RV and taking a road trip. After all, an RV allows you to travel without exposing yourself […]

Can I travel out of state? A guide to COVID-19 trips

As Labor Day looms, where can you go to mark the unofficial end of summer? Can you visit a state that has reopened? Or one that’s still reopening? How do you find out about local […]

Certain feelings have practically vanished since the beginning of the coronavirus pandemic ― the most major of which is hope. The past year-plus has been heavy and exhausting, with barely enough time to breathe before […]